In May, President Nyre sat down with Dana Ruby, the 2018-19 editor-in-chief of The Ionian, the College's student newspaper, to reflect on his time at Iona. 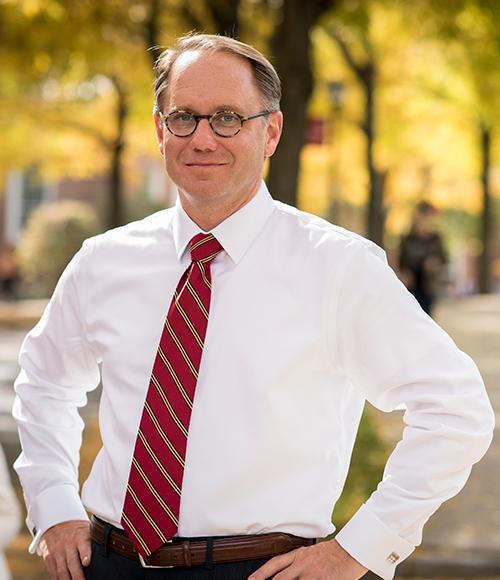 NEW ROCHELLE, N.Y. – Iona College's eighth President, Joseph E. Nyre, Ph.D., completes his eight-year tenure in New Rochelle at the end of this month. In May, Dr. Nyre sat down with Dana Ruby '19, the 2018-19 editor-in-chief of The Ionian, the College's student newspaper, to reflect on his time at Iona.

The following is an excerpt from the interview. You can read the entire chat on www.theionian.org, the new home of The Ionian.

Courtesy of The Ionian

He then went back to his home state of Illinois to run a university-affiliated institute that provided services to children with complex disabilities, trained medical personnel and teachers, helped contribute to the creation of hospitals and clinics across the state, and founded state and federal legislation at the same time that President Obama was serving as senator for the state. Nyre then knew after eight years of serving as president of this institute that he wanted to be president of a college. After searching for the right fit, he was inaugurated as the eighth president of Iona College in 2011.

The Ionian's Dana Ruby sat down with Dr. Nyre to talk about his time at Iona, how his family is reacting to the move and his new job at Seton Hall University.

This interview has been edited for space and clarity.

DR: Why did you want to become the president of Iona?
JN: I've always been connected and working as either a faculty member or as an administrator at some capacity with higher ed, and I knew after eight years of being the president of the institute that I was going to become a college president, the question was what type of college and where? And who would think I should be their president too, as it goes both ways. My interest was primarily a faith-based institution, and I am Catholic…I was then recruited from a search firm into the Iona search. I got to know Iona better by coming anonymously and walking around campus; I came in without a suit on, just kind of like someone walking off the street. I could have been an adjunct faculty member, I could have been anyone–and I met a security guard, who has now passed away, but he was so proud and welcoming that I said to myself, “Wow, that's strange.” It was almost like it was scripted, but it wasn't…I walked through campus just meeting employees and students, and just kind of talking to people, and I found that the same spirit was repeated. I was trying to find a college that was faith based that was trying to live its mission in an authentic way. I called my wife, and I said 'I think this is one of the places we should rank high on our list, and see what happens.' Jim Hynes was chairing that search, and I met him and Bob LaPenta through the search process, and it turned out, we think, to be a pretty good fit.

DR: You were the first lay [non-brother] president of Iona. How did this affect how you approached the position as well as your actual time as president?
JN: It still weighs on me day to day, because I think a natural question when you have your first lay president or non-clergy [president] is whether or not the Catholic identity of the institution is going to suffer. Across the country, you see more and more lay leaders in Catholic education, both K-12 and higher ed, but it weighs on me. But the brothers, one, embraced me, which was wonderful, and number two, the brothers helped me understand–and I think they're right–that the Catholic identity of the institution rests in no singular person's hands. It's a collective responsibility. Initially, I had a team of brother advisers my first few years that I could ask questions to, bounce ideas off of, gain historical context. Then, over time, I went down to a singular Christian brother adviser, but I think a pretty important part of understanding Iona is having the brothers to be there to provide advice and feedback… I pray that there's a brother president [at Iona] again someday, because that means the brothers by way of their vocations are doing well. I think that's a great result, but I think it's going to be some time until that happens.

Read the full interview on www.theionian.org.