Finding Space to Explore and Reflect 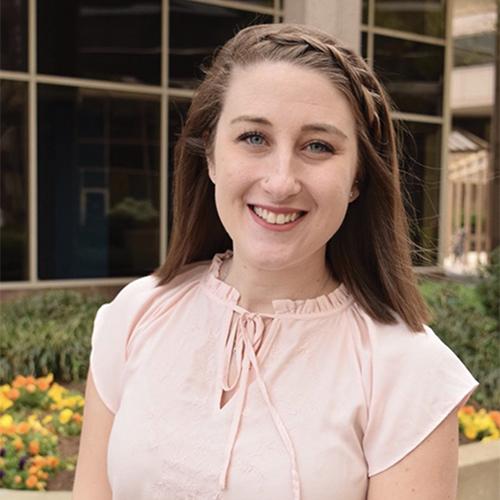 A self-described “overzealous” planner, Jackie Hubbard created numerous lists and spreadsheets to help her choose the right college. “When I came to Iona, I didn’t take a single note because I was so enamored with the campus. I felt like I was home,” Jackie recalled.

It didn’t take long for Jackie to make her mark at Iona, where she served as president of Best Buddies and Students for Peace and Justice, worked as a resident assistant, and volunteered as a tour guide. As a psychology major, Jackie was a member of Psi Chi and the psychology national honor society. Jackie participated in three mission trips, volunteered with campus ministries, and led a Kairos retreat. “My mission trips and Kairos were life changing for me,” Jackie explained. “I was able to look introspectively at my love of service. I opened up to myself and others. Before I came to Iona, I was very guarded. Iona gave me space to explore my passions and reflect on my life.”

One source of inspiration for Jackie was Professor Robyn Brown-Manning in Iona’s Department of Social Work. “Professor Brown-Manning was the first professor to encourage my dream of going to law school to pursue my passion for policy work,” Jackie said. After graduating from Iona, Jackie attended Northeastern University School of Law in her home state of Massachusetts, earning her law degree in 2018. While in law school, Jackie interned at a juvenile court, a law firm, a nonprofit, and with the federal government.

Jackie went on to become the youngest Joseph P. Kennedy, Jr. Foundation Public Policy Fellow in the program’s history. As a Kennedy Fellow, Jackie worked for U.S. Senator Patty Murray. Jackie played a key role in developing legislation to support individuals with disabilities and promote other human rights issues. After studying for the bar while working full-time on Capitol Hill, Jackie passed the bar exam in February 2019. Following her fellowship, Jackie was hired as a public policy analyst with the National Disabilities Rights Network. Recently, Jackie moved back to Massachusetts to work as a Legislative Director and General Counsel for a Massachusetts state senator.

“Iona taught me how to serve others while honoring my own path,” Jackie said. “I was able to let go of what I thought I ‘should’ be doing and do what I wanted to do. I still make a lot of spreadsheets but I am learning to be a more mindful person, navigating life as it comes, because of my experience at Iona. I honor myself while continuing to give back to my community, my friendships, and my world.”