Scholarship, leadership and service are key components of recognition. 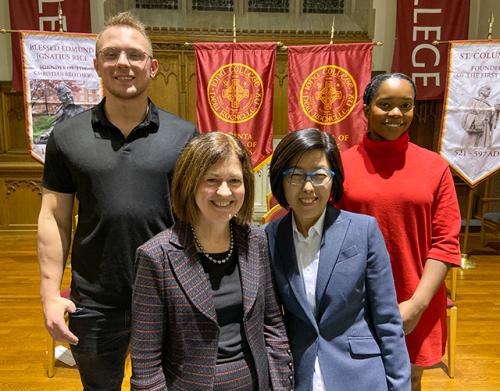 Darcy M. Katris, Esq., ’82, delivered the keynote address in the Arrigoni Center. A chemistry major, Katris received her degree, magna cum laude, from Iona in 1982. At the time, she had no idea that later in her career she would be listed as one of New York’s "Super Lawyers" for nine consecutive years. Her expertise as a partner at Morrison Cohen LLP is in complex trust, estate and tax issues. She is also a member of the Iona College Alumni Association Board of Directors and a member of the executive committee of the New York State Bar Association Trusts and Estates Section, among other positions. She emphasized that students should be well-rounded, offering the following words of wisdom:

Lucia Antoine ’20 and Jakub Korek ’20 are co-presidents of the Delta Epsilon Chapter at Iona. Korek, of Warsaw, Poland, will be graduating with a double major in information systems and finance this May. After a successful internship at Deloitte this past summer, he is excited to start his employment with the Manhattan-based audit, consulting, advisory and tax services company in July.

"We are now one step closer to graduation," said Korek, who is also on the swim team. "It’s really an exhilarating feeling, the way that this positions us to give back to our community now and in the future."

Antoine, an international studies major and speech communication minor, is currently debating whether to pursue her MBA at the LaPenta School of Business at Iona College, or go to law school. Either way, she said, Iona has prepared her well to take these next steps in life.

"At a bigger school, you’re just a number. Here you’re a name," said Antoine, of New Rochelle, who transferred to Iona after feeling lost in the crowd of a larger university. "This is such a defining moment, where I can look back and say, ‘Yeah, I really did fight the good fight.’"

As part of the ceremony, Sunghee Lee, Ph.D., Board of Trustees endowed professor of chemistry, was also inducted into the Chapter, receiving recognition as Faculty Speaker of the Year.

In addition, Iona inductees Laura Kandro and Lauren Talty received Honorable Mention awards for their submissions to the national writing competition of Delta Epsilon Sigma. Kandro also is the recipient of the Fr. J. Patrick Lee award for service, a recognition that Iona students have received four of the past five years.