CollegeFactual.com recently ranked two of Iona College's programs among its best in the United States. 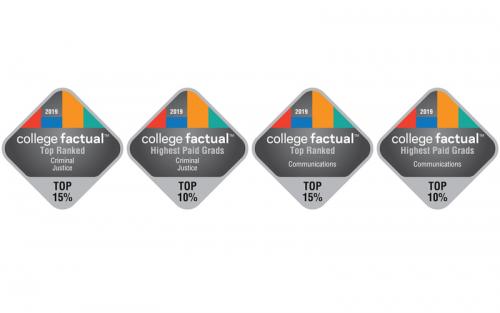 College Factual's mission is to help every student get their best fit education for less, helping students find and get great deals on the best fit colleges for them. Data is obtained from public and private sources including the Integrated Postsecondary Education Data System (IPEDS) from the National Center for Education Statistics, a branch of the Department of Education; salary data from Pay Scale and the Department of Education and various other data sources documented in methodology articles for each ranking.

Iona College’s Criminal Justice program ranked in the top 15 percent of all such programs in the United States.

The ranking placed Iona program as 51st of 415 schools nationwide, and eighth of 28 colleges in New York State.

Iona College’s Mass Communication program also ranked among the top 15 percent in the nation. Iona Mass Comm was listed 70th of 524 programs nationally, and seventh out of 40 schools in New York State. This year’s ratings show remarkable improvement for the College, as the mass communication program jumped 41 slots on the national ranking, and five slots on the state list.