The economic impact represented a nearly $26 million increase from the prior year and was released as part of a study conducted by the Commission on Independent Colleges and Universities (CICU). 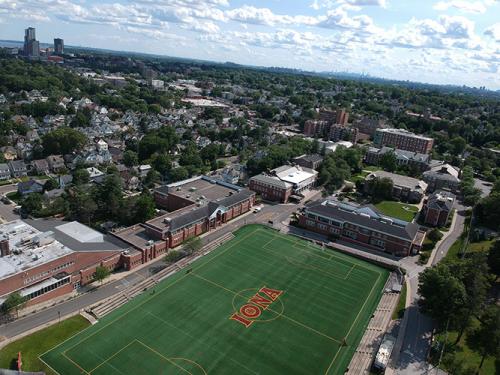 NEW ROCHELLE, N.Y.– Iona College contributed $284.4 million to the regional economy and was responsible for 1,930 jobs in 2017, the College today announced. The economic impact represented a nearly $26 million increase from the prior year and was released as part of a study conducted by the Albany-based Commission on Independent Colleges and Universities.

The study, which looked at New York State's more than 100-plus private, not-for-profit colleges and universities, also found that Iona College's presence translated into $104.3 million direct spending; $36.5 million in student and visitor spending; $16.9 million in construction spending; and contributed $7.8 million in local income and sales taxes.

"As one of New Rochelle's largest employers and one of the Hudson Valley's regional education anchors, it's gratifying to see these figures and understand their importance," said Joseph E. Nyre, Ph.D., president of Iona College. "We not only strive to be an excellent institution of higher education, but to be a good neighbor to New Rochelle and our surrounding communities."

Of the jobs supported by the College, 930 were directly employed by Iona and another 1,000 were a result of the College's spending and presence in the community, the study noted. In recent years, Iona generated construction jobs when it completed a new residence hall on North Avenue; began renovations to Spellman Hall; and began construction of its new LaPenta School of Business building which will be complete with state-of-the-art classrooms, event space, media suites and a high tech trading floor classroom.

Iona's economic impact was one part of the study's broader findings, which concluded that private, not-for-profit colleges and universities in New York contributed $88.8 billion to the state's economy; paid more than $2.2 billion in state and local sales taxes; and supported more than 415,600 jobs. The study showed that 25 college campuses in the Hudson Valley generated $5.2 billion in economic activity.

"New York's private colleges are an integral part of the state's economy, serving as major employers, anchor tenants, and economic engines in every region of the state," said Mary Beth Labate, CICU president. "While private colleges in New York are focused on ensuring their students have the skills they will need to compete in the economy of the future, they are also strengthening New York's economy today. We are private colleges, but we are working to benefit the public good in a very real and important way."