NEW ROCHELLE, N.Y. – The Hynes Athletics Center – home to Iona College athletics and the home court of the Gaels' men's and women's basketball and volleyball programs – will undergo transformational renovations following the conclusion of the 2019 spring academic semester. Thanks to a generous lead gift from Edward F. Arrigoni '56, '91H, an innovative design of the facility will maintain the building's current footprint and be completed in time for the beginning of the 2019-20 basketball season.

The renovations will dramatically change the experience for both student-athletes and fans with seating around all four sides of the court, state-of-the-art LED scoreboards, improved lighting and sound, a new playing surface, and further support Iona's ESPN School Productions efforts. A new Arrigoni Hall of Excellence will be created in the front entranceway to showcase Iona’s accomplished student-athletes creating a fitting tribute to the fine men and women who have represented Iona and its athletic legacy.

The investment from the Arrigoni family also calls upon alumni and friends to help complete the $6 million project through raising an additional $500,000 from supporters.

"Mary Jane and I are happy to make this gift and it is our hope that others follow our lead and decide to make their own impact by investing in the future of Iona Athletics. We are excited for our Gaels to continue to build upon their success in an upgraded Hynes Center facility," said Arrigoni.

The Arrigoni challenge provides matching funds, on a 1:1 basis, doubling the impact of each donor's gift.

"We are thrilled to announce the upcoming improvements and reimagining of the Hynes Athletics Center," said Iona College President Joseph E. Nyre, Ph.D. "Edward and Mary Jane Arrigoni have always been staunch supporters of all things Maroon & Gold, and once again we are blessed with their generosity."

“We are excited to announce plans to give the Hynes Center a needed renovation. Iona fans can expect an enhanced game atmosphere that looks to aid in our continued success,” said Director of Athletics Matthew Glovaski. “It is thanks to the generous commitment by the Arrigonis and the fans who will answer our call for support that we can realize and bring to life the new upgrades.”

"We have enjoyed a tremendous home court advantage at the Hynes Center and look forward to this summer's changes that will help our recruiting efforts to ensure continued success while giving our supporters a more enjoyable experience," said Cluess.

The women's program under head coach Billi Chambers claimed the MAAC regular season title in 2013-14 and appeared in the NCAA tournament following the program's first MAAC tournament championship in 2016.

"Our student-athletes, coaching staff, and the Iona community should be excited about the upcoming changes as they will pay both tangible and intangible dividends to our performances," added Chambers.

Iona volleyball also plays its home contests at the Hynes Center and enters the 2019 campaign as defending MAAC regular season and tournament champions.

In addition, there will be upgrades to Iona's varsity locker rooms, ticket windows and concession areas. These changes will not occur this summer but will be enjoyed by Iona's student-athletes and spectators at a later date.

The Hynes Athletics Center renovation begins in late May and is scheduled for completion in early October. The approved plans are responsive to community recommendations and will not change the building's footprint, height or occupancy.

Detailed renovations to the Hynes Athletics Center include the following:

ENTRANCE
The new Arrigoni Hall of Excellence will be created in the front entranceway to showcase Iona’s storied past in athletics.  It will feature cases displaying championship trophies and memorabilia and showcase all members of the College’s Goal Club Hall of Fame.

SEATING
A needed replacement for Iona's seating areas is one of the more dramatic changes of the project. The current east bleachers, or general admission section, are the original stands from the opening of the then-named John A. Mulcahy Campus Events Center in 1974. The west stands, or reserved seating, were installed in 1998. The east and west bleachers will be replaced with four banks of seating surrounding the main playing court. As a result, the orientation of the court will be rotated 90 degrees to accommodate the new seating. The configuration allows for seating on all four sides of the court for the first time in building history while allowing for a defined student section and band platforms along the east end of the building. Defined accessible seating will also be available with the installation of new seating.  Iona's current seating layout contains 225 chairbacks and 40 courtside seats. The new configuration allows for 253 chairbacks on the north side while maintaining current courtside numbers.

The maximum gymnasium occupancy was originally 3,000 several decades ago. In recent years, seating was reduced to approximately 2,600 by upgrades, including a temporary camera platform installed to facilitate television broadcasts, a band platform for Iona's student pep band and a defined reserved seating section on the general admission side for complimentary tickets provided to visiting teams. As a result of the new configuration, the official capacity of the Hynes Athletics Center will be adjusted to 2,578.

PLAYING SURFACE
The playing surface maintains three full basketball courts with north-south orientation for varsity athletics practices. Two additional baskets will be hung for the new main court, which as noted will be rotated to allow for the new seating banks. Iona's bench will be along the south wall, in the southwest corner of the building, near where the team exits from the locker room area. The visiting bench is located on the southeast corner of the facility. An updated look on the floor featuring Iona's primary shield logo in the center will be unveiled with the renovations. The current maple floor was installed in 2008.

SCOREBOARDS
The current scoreboards, which measure approximately 16' x 12', and were installed in 2014, will be reconfigured into fascia ribbon displays along the north and south walls. The 10mm LED display will be made into a 65.6' ribbon along the south wall behind the benches and two 16.4' ribbons along the north wall on either side of the TV camera platform. In addition, four 4mm LED displays measuring 12.6' x 9.45' will be installed in each corner of the building, more than tripling the current square footage of LED scoreboards in the building. The four corner displays, fascia ribbon boards and sideline scorer's tables will be integrated to operate from the same area. Iona has retained its current partner, ANC Sports, for scoreboard installation.

SOUND
A new state-of-the-art sound system replaces the current system, which was installed in 2013. The current system was sufficient to facilitate athletics events, however, with the addition of the video boards a year later, the design was not ideal for assemblies held in the gymnasium. The sound system will be configured to accommodate both athletics contests and events such as admissions and commencement assemblies, convocations and high school graduations that are currently hosted in the Hynes Athletics Center.

LIGHTING
Upgrades to the lighting system will also be made and – as with the sound – will be adaptable to all events taking place in the facility including practices, contests and assemblies. The new lighting ensures better service of our top quality, student-produced ESPN game coverage to television broadcasts. The current lighting system was installed in the early 2000s.

ADDITIONAL IMPROVEMENTS
In addition, there will be upgrades to Iona's varsity locker rooms, ticket windows and concession areas. These changes will not occur this summer but will be enjoyed by Iona's student-athletes and spectators at a later date. 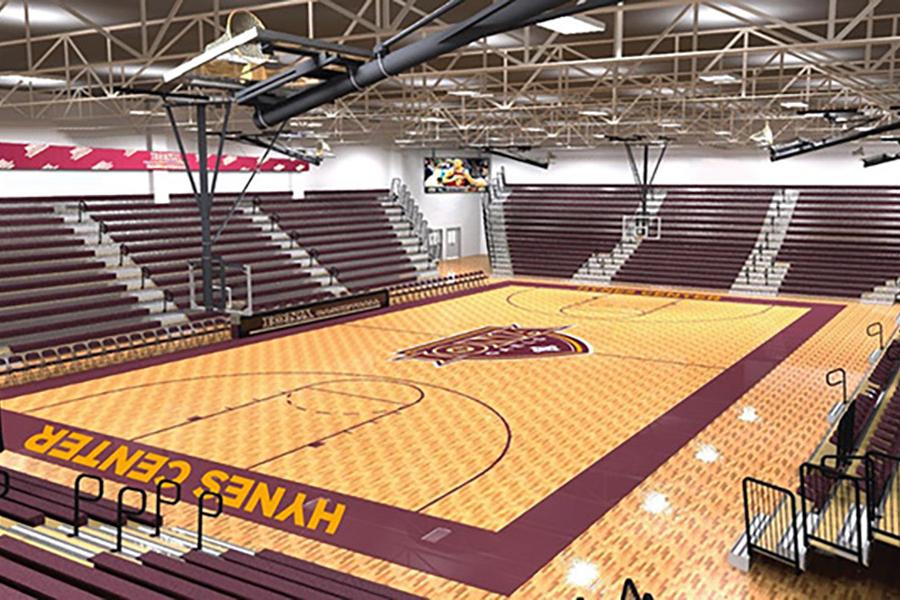