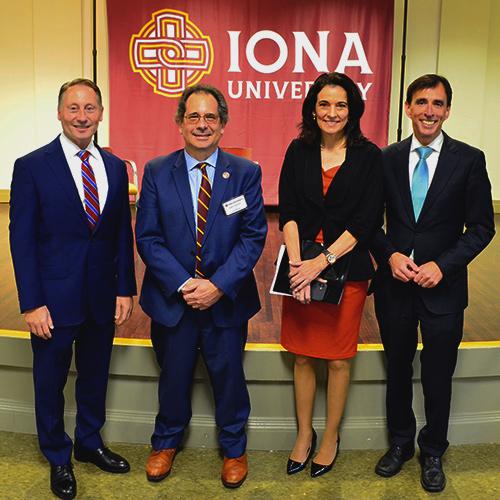 Dr. Jeanne Zaino, an award-winning political science professor and Bloomberg News political contributor, moderated the discussion. As the author of “American Democracy in Crisis: The Case for Rethinking Madisonian Government,” Zaino’s critical understanding of the political and civil unrest within America helped lead the discussion between the two politicians.

Astorino and Bramson deliberated on topics ranging from the media’s influence on the current political landscape to hotly debated issues such as gun control and abortion.

Despite their differences, Bramson emphasized it was important to understand contrasting points of view, saying: “We need to remind each other of the fact that it is a good thing [to have different opinions], and we should go out of our way to be exposed to competing points of view, even if they may make us uncomfortable. Because it's only through challenging your views that you become more confident that you really have the right perspective.”

Astorino said that despite their political disagreements, their relationship serves as a model for respectful discourse. “Noam and I have clashed, but we're friends,” said Astorino, who is also a former candidate for New York governor. “I think when you have an opponent, not an enemy, there's a big difference. If you look at somebody as the enemy, you'll do anything to defeat them. But if it's an opponent, it's treated as respectful.”

At CBS and News12, Iona’s Teodora Mitov ’23 Plays a Leading Role in the Newsroom