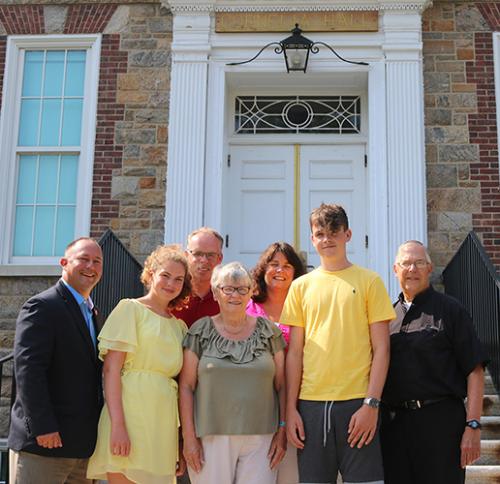 Brother William Barnabas Cornelia came to Iona in 1940 when the Christian Brothers decided to act on their longstanding wish to establish a men’s college in New York. As the first president, he lined up courses, hired faculty and recruited students. Iona College opened on September 19, 1940, with 83 students. Br. Cornelia (1885-1955), a Dublin native and professor of Romance and Classical Languages, convened the new students and faculty, challenging them to strive to high ideals both in their commitments to secular learning and to virtuous living.

A man of many talents, Br. Cornelia held a master's degree in chemistry from the National University in Ireland and a doctorate in Romance languages from Columbia University. At St. Mary's College, Nova Scotia, he started an engineering department and later became president. Besides his diverse academic interests and his love of sports, Br. Cornelia was known for his student-centered approach to education.

Former student, Christopher Grant, once queried, "What did he possess that others lacked? He was gifted but so were others. He was thorough but so were others. He was fair and just but others were also. To me the answer seems to be that he cared. He cared, and he cared tremendously about us and our problems. And, because he cared, we went to him. He did not seek us out; we went to him because we always had the feeling that he understood and that he cared."

Brother Cornelia’s family, visiting from Ireland, toured the grounds and buildings of Iona, including Cornelia Hall, which was named for Iona's first president. Built in 1940 as a science building for Iona Prep, it was seized in a friendly take-over by the brand-new College – making it the first Iona College building.

Br. Cornelia retired as president of Iona College in 1946, and in 1947, he returned to teach. He died in 1955. In later years, the College created the Brother William B. Cornelia Founders Award for Outstanding Service to Iona in his honor.

Before visiting the Iona campus, Br. Cornelia’s relatives visited his grave at the Christian Brothers Cemetery in West Park, N.Y.

Florence Gavin and her family found the visit gratifying. They had heard so much about their uncle and the important work he did at Iona, and they were pleased to see how much the campus had grown, how successful the College had become, and how significantly Iona impacts the lives of its students.